TRAIN WITH THE BEST

TO BE THE BEST

“As a player, I squeezed every drop of talent that I had in me and left it all on the field. Looking back, I feel blessed. As a coach, I try to get that out of our players. Have them give their best, and then push a little more.”

Founder of the Pirates

When Rick Strickland broke his hand in his Junior year of college at Austin Peay, he was Top 10 in the nation in Batting Avg. and Stolen Bases. It was a blow missing the season, but like he tells his players when one door closes, another opens. He got a chance to play in the Cape Cod League with some amazing talent. “I played with great players and future Hall of Famers. Frank Thomas, Mo Vaugh, Tim Salmon, Jeff Kent, and Denny Neagle. Playing with top talent elevates your game and your mind”

Rick came back and tore it up his Senior year leading the team to its first winning season in a decade and helping turn the program around. “The leadership, that’s what really stays with me. What the team and I helped do for the program was immense.”

Rick’s standout play caught the attention of the Yankees, who drafted him. After spending time in their farm system, Rick brought his passion for player development and innovation to coaching.

Rick is driven by improving players and helping them battle through challenges – mental and physical. “If you want to hit hard or throw hard, you have to train hard. You have to push your past what you think you can do to achieve more.”

Baseball is a game of speed and power. What you do in the gym, will show on the field. His obsession with making improvements and player feedback took him down the technology path, where he has been a pioneer. He worked in early-stage development with Blast Motion, Rapsodo, Diamond Kinetics, and Uplift.

A true student of the game, Rick grew up in Chicago as a two-way guy – a player AND a sports reporter. “Starting at 6 years old, I played constantly, but I also had to give my uncle complete recaps of the Cubs and White Sox games. I was his ESPN. What was the score? How did they get their runs? I had to tell him the story behind the game.”

After years of playing, coaching, and “reporting,” Rick can readily spot the story behind each player’s swing and throw. For him, and the CRTR staff, understanding how a player moves in training and practice is key to unlocking how they will perform on the field. Their collective job is to make players better.

With over 375 college commits, 78 professional players, and 2 All-Stars in Andrew Benitendi and Jake Odorizzi, Coach Strickland’s obsession with player development is the centerpiece of every training program. If you’re serious about elevating your game, reach out now to CRTR and get started with an evaluation.

“When I was a kid, I imitated everybody’s batting stance. Learned a lot about hitting then!”

“I start by asking the player two simple questions: Who do you train with? What have you been working on with your coach? Then I patiently watch, observe, and build a plan for that player.”

“A lot of kids come to lessons for fun and to get better. A lot of parents bring their kids looking to get an edge. As a coach, I try to do both. Kids learn best when they’re engaged. We cover a lot of ground, but my superpower is making it memorable.”

Ryan started playing the game when he was 5. He remembers playing in the schoolyard and dreaming of playing pro ball. He went to Fox High School, was a two-way player, and made All-Conference his junior year. He was recruited as a PO (pitcher-only) to play at Webster University. His passion got him into coaching. “If I can’t play pro ball, I figured the next best thing I could do is to help kids.”

Ryan is obsessed with fixing pitching mechanics. “I can’t turn it off. I see things and I really want to help players out, no matter what their age.” He sees a lot of players that have a feel for the game and the mound, but need a few critical changes to elevate their game.

“My number one issue for almost all pitchers is their glove-side arm. It doesn’t get coached enough. Players forget or don’t know-how and their arm flies open. It throws everything off. I tell the kids to reach out glove-side, grab the catcher, and put him in your pocket to really remember it.”

Making sure players stay healthy is a priority for Ryan and the pitching staff at CRTR. Proper warm-ups, strength training, and routines are building blocks of arm care. Our program preaches band work for arm flexibility, water med balls for power, mobility, and stability. Recovery and stretching ensure player health.

Technology plays a big role at CRTR with arm health, improving delivery and pitch shape. Ryan effectively uses Rapsodo data with players at different levels to get the best results over time. “We show beginners the basics and what their pitches look like to batters. For older guys, we look at spin rate and location by pitch and make mechanical adjustments to make them better.” Our program also uses an arm care app that gives players a customized workout, tailored to their needs. “Players really get into it and the parents love it because it’s easy.”

Parents and players who are looking to safely build velo and understand pitch design, sign up now, and get started with an evaluation.

“Chicken, chicken, and chicken. Not really into sweets, but a peanut butter protein smoothie really hits the spot. Did I mention I like chicken? I also like chicken and rice.”

When Not Playing Baseball

“Pick-up basketball or football. Family time and homework. I am an accounting major, so there is usually a lot of it!”

“I have two german shepherds that keep me pretty busy!”

“We see a lot of incredibly specialized players who are missing basic critical movement patterns. Without them, players risk injury and losing their potential. To get to them to the next level, I start by restoring core basics and teaching a full range of functional movements.”

Matt has been a strength and conditioning coach for three years, but already is seeing changes in the kinds of issues athletes have. “You definitely see the impact of video games on muscle development and movement patterns. Kids are more sedentary now and need to train differently than kids a few years ago.”

Matt’s goal working with younger players is restoring normal human movement that they lost due to sitting and playing video games. He sees problems with hip movement and pelvic extension. “I get them moving, and put together sequences that will create a more durable human being with less risk of injury.”

Also the Strength and Conditioning Coach for St. Charles Community College Athletics, Matt is adept at working with athletes of all ages. A student of biomechanics, Matt is obsessed with building a firm base of movements in players to increase speed, power, and mobility while not putting the player at risk. “We have to make you strong before we can make you fast.”

Taking a holistic approach to coaching, Matt addresses the physical and mental needs of every athlete he works with. “It’s important to be a good human being. The right mental attitude will take you a long way. My parents set a good foundation for me, I try to do the same for the players I work with. Part of my job is to help make them successful men in life.”

That care and concern for the total athlete are embedded in our approach at CRTR. Teamwork, dedication, and learning how to get the most from your coaching sessions are priorities.

For players who are serious about their athletic development and staying safe and healthy, schedule an evaluation now. Matt and our CRTR coaches will increase your power and improve your nutrition.

Breakfast! If I could, I’d eat it 3 times a day! French toast is awesome, but nothing beats my grandma’s biscuits. Every single family holiday we get her chocolate biscuits. The best!

When Not Playing Baseball

“Hanging with friends and family. Learning. Love to learn. I am majoring in Economics and Finance, but I am teaching myself how to code. Biology, too. I find it fascinating.” 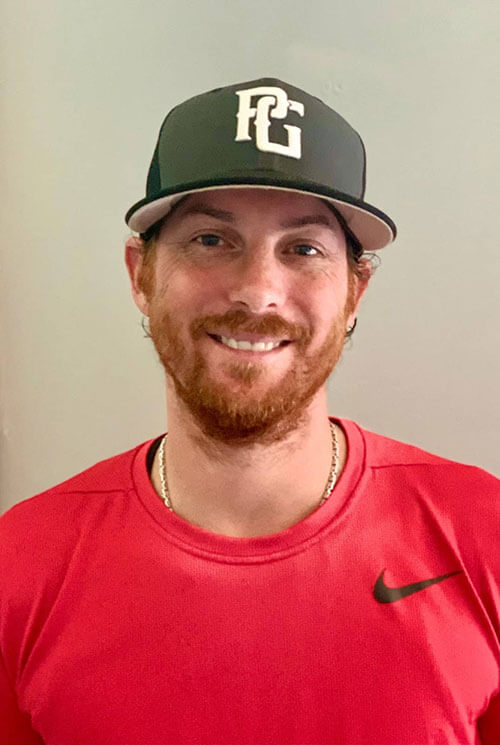 “I don’t throw the whole kitchen sink at players when I am coaching. I might see several things to work on, but I want them to learn the right way at the right pace. Overwhelming them doesn’t help them and doesn’t make you a good coach.”

Justin’s been with CRTR for 15 years and has learned a lot in his time here. He grew up

Wildwood, MO and went to Marquette HS where he played varsity as a Sophomore. Giving back to parents and players is important and personal. “I played with Rick back in 2002. My dad was coaching me when Rick reached out and asked if I wanted to play the JUCO circuit. Coaches can have a huge impact on you.”

Justin’s dad was drafted out of high school and instilled in him a great work ethic and a love of practice. “I didn’t have a lot of downtime. I had a ton of passion and I played a lot! He taught me how to act on and off the field. How to respect the game. I do the same for my players.” Justin played college ball at the University of Mobile and understands what competition and preparation look like at the next level.

For high school players looking to play in college, Justin is a great guide. He relies on tech and experience. He knows that HS players are looking for an edge and understand the data behind their swing. “Knowing your numbers is important. Launch angle. Exit velocity. Swing mechanics. The older players are looking to put it all together to produce harder contact and I can break it down for them.”

For younger players looking to improve their game, Justin’s been a youth coach and knows an individual approach to player development is better than a cookie-cutter approach. “The basics are really important. You’ve got to nail them. Move your feet, have soft hands, keep your butt down, and get your hands out.” He reminds players not to make things more difficult than they really are"

For players and parents looking for a patient, experienced eye to help guide them, Justin invests his time in development. Reach out to him now for an assessment to get started.

“Put your nose to the grind and keep working. If you are good, coaches will find you.”

“Our hitter had a collision with the opposing team’s first baseman while running to the base. Their guy makes the tag. Inning over. He’s the first kid up to lead off the inning. Our pitcher gets him to an 0-2 count and out of nowhere, he helicopters the bat at our pitcher! Can’t make that stuff up! Our pitcher is safe, but the batter’s mom starts yelling and the other coach and I had to calm everybody down. Crazy! You have to respect the game. Fortunately, the other coach was cool and told us that’s not what our program is about.”